Extract from Chapter Two: Into the Magical World
© 2001 by Richard Elen

Note: This is a work in progress. The final version may have significant differences.

Into the Magical World 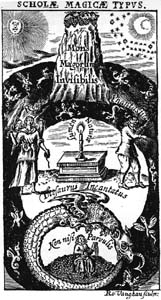 Magical reality-models show a number of important differences from the ordinary everyday consensus reality. As I have suggested, the attitude to belief constitutes one such fundamental difference. Magic certainly involves “the creation and application of belief systems”, but we will discover that there seems more to it than that. We should also bear in mind Crowley’s definition, which we can restate slightly differently than before as “The Science and Art of using little-known forces, directed by imagination, to bring about changes in the physical environment ”.

“Magical Technology” (a term I think Tom Graves and I can reasonably claim credit for) allows many “opposing” theories of operation - differing beliefs or reality-models - to co-exist, primarily by pointing out that they can each show themselves capable of performing a certain task. There exists no “coherence theory of truth” in magic, so things that would appear to be mutually incompatible (like free-will and predestination for example) may both exist in a given model at the same moment. If that sounds difficult to achieve, consider this: “All living beings form part of the Architect’s Plan for the Universe, and thus every human action follows the course laid down in that Plan. Whenever we exercise our free will, therefore, our actions must, by definition, conform to the Plan. Just because we do not know the course we will take, this does not mean that nobody else does.”

All theories and explanations appear useful, if we can use them as tools to extract information about or otherwise operate in our world. “Does it provide useful information?” and “Does it get results?” remain primary tests of a magical reality-model. Beliefs are the tools, and belief, we propose, seems to make the effect possible. Contrast this with the rather than the more normal “cause and effect” relationship that science has traditionally preferred. But notice that 19th century science required two “incompatible” theories of light to explain a light-bulb: one to explain how an electrified wire can emit light, and a second to allow the light to leave the bulb itself. The wave and particle theories of light cannot be made to fit together into a coherence theory, but they can be brought together within a general quantum theory that allows the appropriate aspect to manifest under the appropriate conditions. Neither explanation is “true” in all cases - it does not hold for all events - but each is valuable in context.

Similarly, Magic calls the concept of “truth” into question. “Absolute Truth” infers a single, static “ultimate reality” - and that we can perceive it. We usually assume that we can refer to something as “true” if - what? If it happens enough times? Some scientists sometimes seem to maintain this position, that if we can repeat an observation reliably, we can regard it as “true”. On the other hand, phenomena which occur occasionally - like seafood distributed from the sky by the Mad Fishmonger; or cannot be called upon to perform to order - as in many ESP experiments - often seem too easily dismissed. Luckily, physics in particular has realised that probabilities and statistical likelihoods do demonstrate important phenomena, and nowhere do we find this change of attitude more prevalent than in quantum physics.

Magic - and the paranormal in general, of which magic is a part - do not promise reliably demonstrable phenomena, or cause-and-effect. Neither do they seem to represent a “reality” that remains “out there”, statically, waiting for us to uncover its rules. On the other contrary, magic suggests that you find what you are looking for: that a theory generates its own proof. This we must consider in addition to the obvious possibility that a researcher’s hypotheses and personal inclinations will cause work to proceed in a particular direction, looking at some things very closely, expecting results, and avoiding others that are assumed to be spurious.

You could underline this for yourself by trying the following experiment, a common one in parapsychology courses. Take a group of people and ask them to tell you which of them believe in ESP and which do not. Then give them all a questionnaire, telling them that tomorrow you will hand them a pack of Zener cards (special cards used in ESP experiments, each of which is marked with one of five different symbols: star, cross, wavy line, square, circle) and ask them to turn up each card in the pack, one by one. Today, you want them to guess the order of the symbols they will turn up tomorrow. You will find, by and large, that those who told you they believe in ESP will get a higher score than those who told you that they did not.

Magic suggests that beliefs do indeed result in effects. “Truths” are subjective things that result from an interaction between a person or group’s belief and the person or group's reality-model. Remember, we never see or experience the world as it “really is”: we see the world through a distorting glass, distorted in particular ways which correspond to our beliefs: our own model of a supposed “ultimate reality”.

Back to Shades of Time

This site and its contents are copyright Brideswell Associates © 1999-2001.