The Finger and the Moon - by Geoffrey Ashe 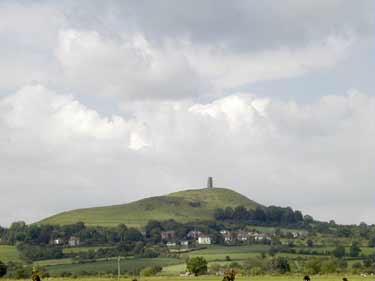 Then suddenly he roused me.

He mentioned a happening of the summer just past. Near Glastonbury – within sight of the Tor, within range of its formidable spell – a group of those people whom I knew better than to call hippies had convened a semi-mystical pop festival. Or a semi-pop mystical festival. Anyhow they’d built a pyramid to occult specifications, and invoked cosmic energies at the solstice, and it had all been a muddy, strident, tumultuous, beautiful scene, bubbling on for most of a week, raising protests for miles around, losing money, and carrying its own triumphant justification for anyone who was there. I had been there, a senior well-wisher. It transpired that Martin Ellis had also been.

This was a prelude to the second part of his argument. From then on, I recall, I could sense a creeping distress in the audience. Several faces stiffened. Several of the Free Minds, having relaxed minimally during the first part, resumed their strait-jackets.

Ellis claimed that the anti-science reaction he’d been talking about was the clue to portents like the Glastonbury Festival. The current movement of minds, he insisted, wasn’t merely away from science, it was towards rival attractions – myth, astrology, magic – and an expansion of consciousness. He was right, of course, and events (some events anyway) have been bearing him out.

Among the proofs which he brandished then was a French book, The Morning of the Magicians, which had been selling wildly for eight years and was now inspiring more bestsellers of a similar type, occultish mélanges which tried to make science itself fantastic. He also drew the meeting’s attention to the encyclopaedia Man, Myth and Magic, which had been coming out in weekly parts and defying the part-work norm by making a profit. Yet another of his points was that the tools of science itself were being diverted to strange ends, like computerized horoscopes. Alien cults were taking root in the West. Time magazine, having lately asked whether God was dead, now asked whether he had come back to life.

‘As to that,’ said Ellis, ‘I think it’s a red herring. We aren’t due for any revival of orthodox religion. It’s a revival of older things. In the 1960s the big topic was Sex. In the 1970s it may well be Magic.’

With the 1970s already in progress, this was not a highly original remark. Journalists had made it before Ellis. Only, he made it in a way of his own, which somehow avoided bringing the word ‘trend’ to mind.

He laid stress – as the journalists did – on the articulate young, their fashions in star-reading and witchcraft and neo-druidism, and the Jesus cult which was then getting to be heard of outside California. But he never gave the least hint of patronizing The Young, as such, or holding them up as exhibits. Nor did he suggest an oldster trying repellently to be ‘with-it’. His conventional looks (I remember that much) disposed of any ‘Swinging Curate’ suspicion. So did his style, which was contemporary, but neutral. That talk never sounded like a rejected script for Oz or IT. Throughout, it remained simply – a talk.

It didn’t go down well, at any rate with the vocal part of his audience. I have a hazy but definite recollection of hostile questioning. The hecklers’ theme was that the whole magical thing was a flight from reason and therefore sinful. They expected Ellis to be defensive. He wasn’t. He counter-attacked.

His reply went like this. ‘You claim to speak for scientific, progressive humanism’ and you equate it with reason. I’m telling you it hasn’t worked. It’s supposed to instill devotion to the good of mankind. But apart from a high-calibre few, it doesn’t. The more science, the deeper the apathy and sense of futility. On the one hand we live in dread of technological horrors: war, overpopulation, pollution, the entire open-ended Doomwatch package. On the other hand there’s a powerlessness to do much about it. A failure of will – because of this feeling that a darkness of soul is closing in and death is the end and science has made everything hollow and pointless. Now if that’s so (and I can give you evidence, clinical scientific evidence, that it is), then I wouldn’t call it a flight from reason to look elsewhere for rescue: it’s thoroughly rational. At least, it can be.’

The secretary thanked him, a shade uneasily, with some stock formula like ‘giving us plenty to think about’. I wanted to ask Ellis why he went to the Glastonbury pop festival. It took me a few minutes to reach him, because he was instantly beset by members of the audience who hadn’t spoken, and sounded friendlier than the hecklers. When they dispersed, we only had time for a word or two. He told me he’d read one of my books, and made a comment which confirmed that he had.

‘I’d like to know more about it,’ he added, ‘this Glastonbury mystique you’ve discussed in your writings, and Avalon and King Arthur and all the rest. It’s so potent, and I still don’t understand why. Could you explain?’

I said perhaps, but not in one sentence. Before we got any further the secretary whisked him off for a drink.

A few days later, however, Ellis wrote to me in care of my publisher, with a page of questions about the Holy Grail. That letter is in front of me now, with the rest of my scanty file on him. The questions are clearly worded and concise, very well-informed, very difficult to answer. He asked me what were the Five Changes of the Grail. I wish I knew.

Ellis thanked me politely for the weak replies I was able to give. Then after a year or two of silence he wrote again, from the house where I am now, ‘Allhallows’. He’d opened it as… what exactly? A private clinic? A conference centre? A minicollege? His letter struck me as oddly unexplicit.

Allhallows had come to him as a legacy from a former patient. Basically it was the dower house of an estate. The previous owner had enlarged it and bought up land around. Now the property was Ellis’s, with enough money to convert it for his obscure purposes. Not much more: he was running it, he said, on a shoestring. Until he took over it was still known locally as ‘the Dower House’. though the enlargements had made that name incongruous. The new one was his own choice. He’d opted out after his fashion and moved to Somerset.

He enclosed a brochure. This was a fairly competent job, but gave only morsels of information. His main message in it, repeated in the letter, was ‘Come and see for yourself’. It contained black-and-white photos of the house (Georgian, three storeys), and a garden with a maze, and close-up portions of some intriguing statues or rather sculptures, apparently by a friend of his. He devoted a whole page, without margins, to a picture of an untidy workshop, where work was being done though its nature escaped me. Inside the back cover were further pictures, captionless, of figures described only as ‘some of our visitors’. One showed what might have been the editorial board of an Underground paper; another – possibly – a teacher with a class; another, two men and a woman who were even harder to place, because, as far as I could make out, they had no clothes on...

Back to The Finger and the Moon