The Finger and the Moon 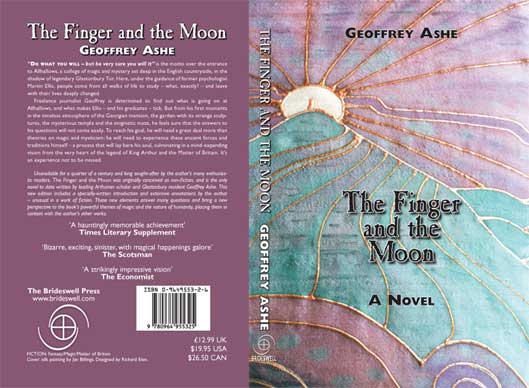 A Novel by Geoffrey Ashe

How to buy this book

UK Booksellers: Order through either Bertrams or Gardners
US/CAN Booksellers: Order from Ingram or Baker &Taylor
In on-line catalogues, search for 0964955326 (ie no dashes). Note that this title is a Print On Demand book. As a result, distributors may show stock levels as zero. This does not mean that the book is not available! Contact us if you have any difficulty obtaining copies.
Promotional postcards are available for this title. Contact us for details.

The Finger and the Moon

"Do what you will – but be very sure you will it" is the motto over the entrance to Allhallows, a college of magic and mystery set deep in the English countryside, in the shadow of legendary Glastonbury Tor. Here, under the guidance of former psychologist Martin Ellis, people come from all walks of life to study – what, exactly? – and leave with their lives deeply changed.

Freelance journalist Geoffrey is determined to find out what is going on at Allhallows, and what makes Ellis – and his graduates – tick. But from his first moments in the timeless atmosphere of the Georgian mansion, the garden with its strange sculptures, the mysterious temple and the enigmatic maze, he feels sure that the answers to his questions will not come easily. To reach his goal, he will need a great deal more than theories on magic and mysticism: he will need to experience these ancient forces and traditions himself - a process that will lay bare his soul, culminating in a mind-expanding vision from the very heart of the legend of King Arthur and the Matter of Britain. It’s an experience not to be missed.

Unavailable for a quarter of a century and long sought-after by the author's many enthusiastic readers, 'The Finger and the Moon' was originally conceived as non-fiction, and is the only novel to date written by leading Arthurian scholar and Glastonbury resident Geoffrey Ashe.

This new edition includes a specially-written introduction and extensive annotations by the author - unusual in a work of fiction. These new elements answer many questions and bring a new perspective to the book’s powerful themes of magic and the nature of humanity, placing them in context with the author’s other works.

'A hauntingly memorable achievement... and all the more so because Mr Ashe sees clearly, and states at every point, the case for the opposition' - Times Literary Supplement

'A strikingly impressive vision' - The Economist

Geoffrey Ashe is widely regarded as the world's leading expert on ancient mysteries and mythology in general, and the Arthurian Legends and the Matter of Britain in particular.

Author of two dozen books on these and other subjects, and contributor to a number of learned journals over a period of many years, Geoffrey Ashe has held visiting professorships at several universities in the United States. He also lectures extensively on both sides of the Atlantic and is a regular contributor and advisor to television documentaries and series on King Arthur and British history and legend.

In the mid-Sixties, Geoffrey Ashe co-founded the Camelot Research Committee, which was responsible for the excavation of Cadbury Castle in Somerset, one of several locations to have a reasonable claim to being the site of King Arthur's Camelot. He was also involved in excavations on Glastonbury Tor.

Read an interview with Geoffrey Ashe on the Britannia site.

Read the press release that announced the launch of this book.

Read an Extract from The Finger and the Moon

This site and its contents are copyright Brideswell Associates © 1999-2006.